prop and costume maker in Switzerland 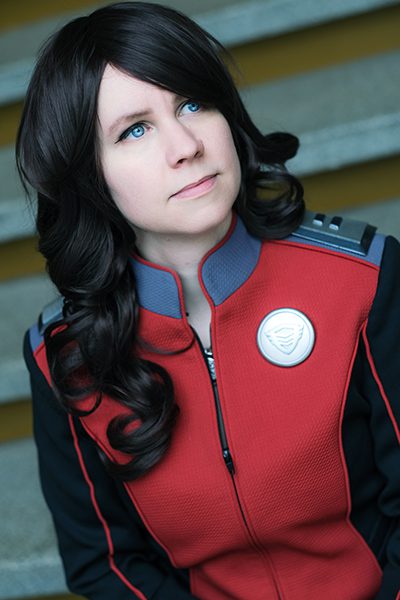 My artist name is Folkenstal, but you can call me Ana. I’m based in Switzerland, Europe.
I’ve started with prop making by the end of 2012. In my workshop I build everything from weapons, armor, jewelry, to other items. When I get the chance, I visit conventions to meet other artists who share the same passion as me and judge costume contests or have workshops for the public.

As far as I remember, I’ve always been drawing or crafting something using all kind of materials. Started with paper and cardboard as a kid, and later worked with Sculpey, clay, and crafted jewelry for a while. And currently working with Apoxie Sculpt, pewter, foam, thermoplastics like Cosplayflex, and resin to create something new.

Find me working on twitch creative where I stream my work regularly.
You can ask questions or just watch me build things. Head over to twitch.tv/folkenstal

The first time I started with prop making in a determined kind of way was when I played The Elder Scrolls V: Skyrim. I wanted to have a few weapons in real life, but the merchandise store of said video game didn’t have anything useful, so I googled and stumbled upon the “art of prop making”. It fascinated me to create something in real that is actually only available in a video game. So after a lot of reading and watching videos I decided to see this as a possible hobby of mine which I could truly enjoy.

I love prop making, it gives me a nice challenge and troubleshooting is a big part of it.
Also trying out new materials is always valuable for my next projects to come.
If you want to know more about my work, fell free to check the FAQ.

what I offer for your events/conventions

booth with an exhibition of my work

Having a cosplay repair station at my booth

Want to leave a message?

If you want to book me don’t hesitate to use this contact form.
I’ll gladly answer your mail within 24 hours.
For commissions requests check here first